Robert Webb settled a claim for a client who died in an airplane crash for $2.45 million. 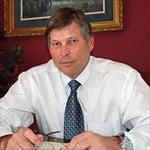